The only match of significance on the last night of the domestic season was at the Ryan McBride Brandywell Stadium as Derry City secured European football thanks to a 4-0 win over Finn Harps who will play in the promotion/relegation playoff against Drogheda United, who beat Cabinteely 5-1 tonight (6-2 on aggregate).

Junior Ogedi-Uzokwe netted his second Derry City hat-trick of the season in the demolition of Harps.

Harps made 11 changes from the team that defeated Waterford last weekend, the Donegal men’s thoughts focused on next week’s promotion-relegation battle.

In fact, Harps’ supremo Ollie Horgan was not at the Brandywell tonight as he was in Drogheda watching the second leg of the playoff game.

After a slow start when Ally Gilchrist, David Parkhouse and Barry McNamee all wasted early scoring chances Derry broke the deadlock with a superb team goal in the 15th minute.

Working the ball forward on the left with accurate one-touch football, the move ended with McNamee threading an incisive pass to Ogedi-Uzokwe and the Colchester United loanee finished with aplomb.

That goal fashioned great confidence with the home side beginning to dominate the possession and in the 23rd minute Junior netted Derry’s second goal.

Having forced three successive corner kicks, McNamee’s centre found the head of Parkhouse and while his effort was hacked off the goal-line, Ogedi-Uzokwe pounced to drive the loose ball home from point blank range.

Well in control at the break, Derry appeared to take their foot off the pedal during the early stages of the second period.

Indeed Derry goalkeeper Peter Cherrie pulled off a superb stop in the 55th minute when Michael Place got onto the end of a Niall Logue centre when inside the six yards area.

However, they increased their lead when Ogedi-Uzokwe netted his third strike having raced into a ball over the top to give Harps’ debutante goalkeeper, Jamie Bell, no chance.

And it was 4-0 in the 76th minute when the impressive Ciaran Coll broke on the left and his pass found fellow roving full back, Grant Gillespie, the Scot sending a powerful drive to the net.

Shamrock Rovers signed off their campaign on a high with a fine display to see off Cork City at Tallaght Stadium.

Leading 2-0 at half-time after strikes by Jack Byrne and Lee Grace, the Hoops could have added more in the second half but this win nevertheless gives them a highest points-per-games tally since they won the league in 2011.

Byrne was outstanding and he had the opening goal in the 16th minute, finishing from outside the area after Seán Kavanagh had intercepted a loose pass out of the City defence.

Ten minutes later, the lead was doubled, Byrne providing the assist from a corner kick to allow Grace to crash a header home.

It was almost 3-0 before half-time, Graham Burke rifling a shot off the post after Kavanagh’s cross, though teenage striker Ben O’Brien-Whitmarsh twice went close to pulling a goal back for City.

On the resumption, Rovers were in control again and but for City goalkeeper Tadhg Ryan, a third goal would have arrived sooner, denying Byrne and Aaron Greene before Burke curled home a free kick on 74 minutes.

Elsewhere, Dundalk hammered Saint Patrick’s Athletic 4-0 at Oriel Park with the Lilywhites lifting the League of Ireland Premier Division trophy for the fifth time in six years as hundreds of raucous fans invaded the pitch at the final whistle, despite being asked not to do so.

The defeat means that St. Pat’s will definitely not be playing European football next season. 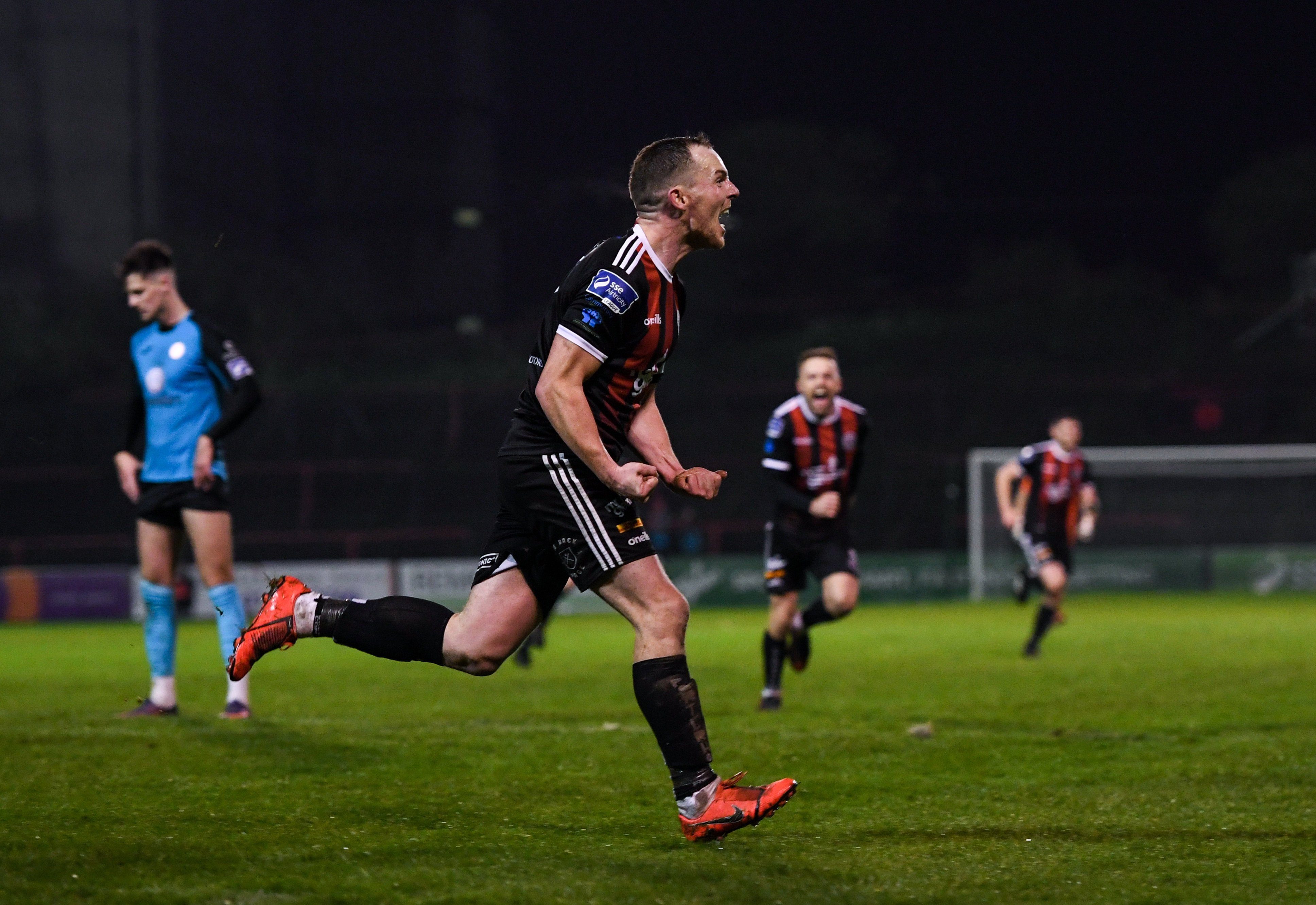 Bohemians assured themselves of third place in the table (they secured European football last Friday) with a 2-1 win over Sligo Rovers.

It was an emotional night at Dalymount Park as veteran captain Derek Pender bade farewell to the home faithful on what his last appearance for the Gypsies.

The 35 year-old said goodbye in celebratory fashion as he scored the winning goal on the night from the penalty spot nine minutes from time, which led to jubilant scenes in the stands and on the pitch.

The other result of the night saw sixth placed Waterford beat long since relegated UCD 4-2 at the RSC.