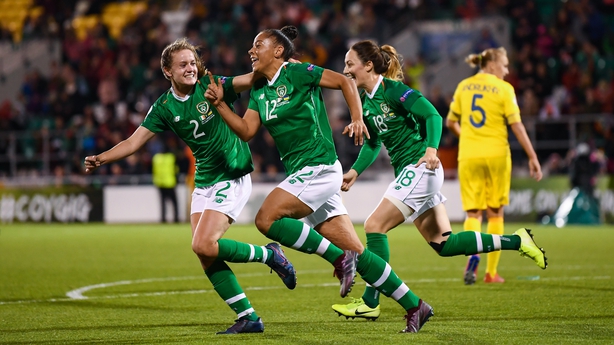 Vera Pauw has gotten her reign as Republic of Ireland women’s manager off to a winning start thanks to a 3-2 win over Ukraine at Tallaght Stadium tonight.

A player-of-the-match performance from Rianna Jarrett who also scored her first international goal on the night helped see the Girls in Green secure a vital win over the Ukrainians with Natiya Pantsualya’s own-goal proving costly for the visitors.

The Irish took a two-goal lead inside the opening half-an-hour, thanks to captain Katie McCabe and Jarrett, before being pegged back by Ukraine. The three points however were secured through an unfortunate own-goal in front of a record attendance at Tallaght Stadium for a women’s international.

Visitors Ukraine made the same amount of alterations from their 8-0 hammering away to Germany – with manager Nataliia Zinchenko attempting to secure the Eastern European’s first qualifying win of the campaign.

Long throw-ins were causing considerable danger to the visitors – both Diane Caldwell and Louise Quinn very nearly profited from some indecision in the Ukrainian six-yard box – just heading wide from a Campbell delivery into danger.

Despite missing a golden chance, she kept working and in the 25th minute her invention and drive teed up McCabe at the near post who made no mistake to give the home side a deserved lead after a strong start to the game.

It got even better for Ireland minutes later, when Jarrett got finished McCabe’s corner to head home the second on 28 minutes.

However, disaster struck just after the half-hour mark when Lyubov Shmatko took advantage of a goalkeeping error from Marie Hourihane.

Hourihane snatched at a set-piece by Olha Basanska and centre-back Shmatko was on hand to turn home with ease inside the penalty area.

Just before the break Ukraine were inexplicably level – with Hourihane once again being punished for some elementary mistakes as Olha Ovdiychuk made the scores level at the short whistle.

Ireland reacted well after the break and soon retook the lead through an own-goal from Natiya Pantsulaya.

Jarrett got on a loose ball on the wing, before taking it under control and crossing it into the box. Denise O’Sullivan saw her rebound crash off Shmatko, before the ball ricocheted off Pantsulaya and snuck into the back of the net.

The game petered out in the final quarter of an hour, with the Republic of Ireland content with their lead, and Ukraine being unable to grab an equalizer given a lack of opportunities up front. A positive night overall for the Girls in Green and a solid start to Vera Pauw’s reign as manager.

Player of the Match: Jarrett (Republic of Ireland).