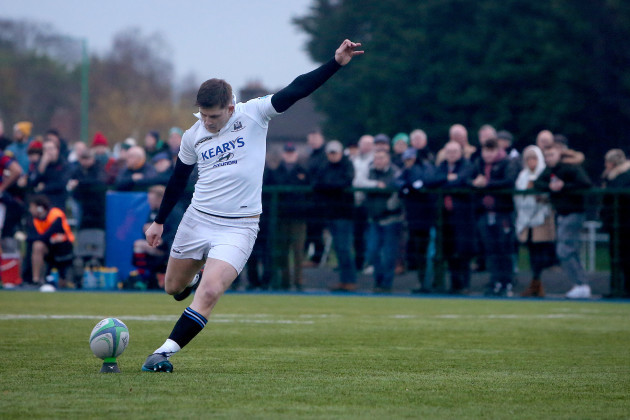 Between them, Cork Constitution and Garryowen have won nine of the 29 AIL titles with Con the reigning champions. They got the defense of their title off to a winning start, but only just at Temple Hill this afternoon.

There was little in the way of try scoring opportunities in the wet conditions in the first-half, though Con centre Greg Higgins always looked dangerous when he got the ball in hand and he made a few excellent line breaks.

It was from one of those Higgins’ line breaks that Con opening the scoring today. Garryowen were whistled for offside and Aidan Moynihan slotted a relatively easy penalty.

The Limerick side would go in 6-3 up at the break however with Jamie Heuston slotting two straightforward penalties.

The real drama was reserved for the second half however as the weather conditions improved.

A poor clearance from just outside the Garryowen 22 found the waiting arms of the electric Higgins and he sprinted the 35 metres to score the opening try in the corner on 53 minutes with Moynihan narrowly missing the conversion for Con.

Moynihan then converted an easy penalty for hands in the ruck on 58 minutes.

A late tackle then yielded a penalty for the Limerick side. They went for touch on the Con five-metre line. From the resulting lineout The Light Blues proceeded to go through the phases and Tommy O’Hara got in on the opposite flank for the try with Heuston landing the extras. Cork 11-13 Garryowen with 76 minutes played.

Con then won a penalty at the death for a high tackle on Joseph McSwiney. They went for touch. The resulting maul yielded a scrum for Con. A few resets led to a penalty for the Cork side and with the last kick of the match, from 30 metres out and at a slight angle to the posts, Moynihan gave Con the win by the minimum.