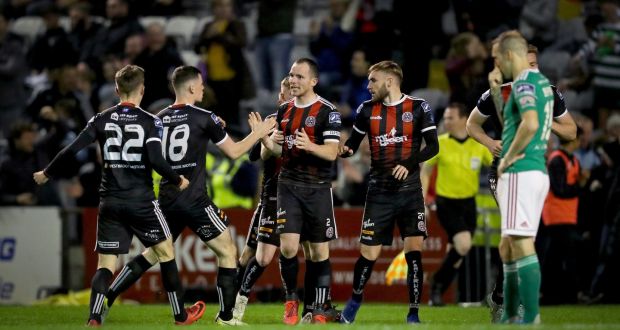 Cork City and goalkeeper Tadgh Ryan in particular can consider themselves unlucky to lose 1-0 to Bohemians at Dalymount Park tonight.

Bohemians moved a step closer to securing a Europa League spot when a speculative ball from man-of-the-match Derek Pender was caught a yard out from his goal-line by the City netminder.

The big match of the night elsewhere went Cork City’s way however. The battle of the bottom two finished scoreless as Finn Harps couldn’t break down University College Dublin. The closest either side came to scoring was midway through the second-half when Harps should have had a penalty for a trip on Rafael Cretaro.

The Students, as they have for some weeks, look doomed to relegation, six points adrift of the relegation play-off place with just three games left to play.

Harps meanwhile look set for the relegation play-off. The Donegal outfit are six points adrift of Cork City – and safety – also with three games left to play this season.

Waterford deservedly won for the second time in Inchicore this season to dent St Patrick’s Athletics’ hopes of qualifying for Europe.

Having threatened twice very early on, Waterford deservedly took the lead on five minutes. Pat’s didn’t deal with a corner which resulted in Dean Clarke clumsily tripping Rob Slevin in the area to concede a penalty which Michael O’Connor confidently dispatched.

Matthew O’Connor made amends for earlier profligacy and wrapped the game for The Blues nine minutes from time with a towering header from Sam Bone’s diagonal cross.

Daniel Kelly’s 13th goal of the season proved decisive as champions Dundalk extended their unbeaten domestic run to 31 games with a 1-0 win over Derry City at Oriel Park.

It might have been expected that Lilywhites’ boss Vinny Perth would experiment with his starting line-up considering that the double is already secure and the Cup final is a few weeks away. That did not prove to be the case however as Dundalk fielded their strongest possible starting XI.

The only goal of the night came in the 64th minute. Substitute Lido Lotefa played the ball out for Seán Gannon whose cross was swept home at the far post by the incoming Daniel Kelly.

The Candsytripes almost snatched a point in the last few minutes but substitute Grant Gillespie saw his drive come back off the post.

Derry now drop to fourth in the league table but are still very much in the hunt for European qualification.