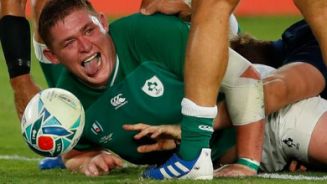 Leading 19-3 at half-time, this was a match Ireland never looked like losing.

Ireland went over for tries in their first two incursions into the Scottish 22, James Ryan and Rory Best ploughing over to put Joe Schmidt’s side 12-0 ahead after 15 minutes.

Greig Laidlaw got the Scots on the board from the tee, but a fortunate bounce led to Tadhg Furlong adding a third try before the first-half was over. Andrew Conway then crossed after the break to secure Ireland’s bonus point.

Ireland have won many games against Scotland – five out of six in the Joe Schmidt era – but none bigger than today’s and not many as emphatically either. Schmidt’s team turned up in a major way, driving into the guts of their opponents from the first whistle.

It would be exaggerating to suggest that Ireland are a contender at the World Cup on the back of this win, but the team have certainly moved on from a highly disappointing defense of their Six Nations title and the 57-15 hammering by England just a few weeks ago during the World Cup warm-up series.

Scotland though didn’t offer much resistance. They were bullied pretty much all over the pitch. The first quarter was the stuff of nightmares for Gregor Townsend and a dream for Schmidt, with Ireland scoring the first try inside six minutes. It came when Iain Henderson advanced into the Scots’ 22. A few recycles later, the move was completed when the towering Ryan drove over the try-line. Johnny Sexton converted.

Henderson, was bruising and brilliant, soared to catch a lineout on 15 minutes and when the rumble went over the line it was Best who got the touch down.

Laidlaw made it 12-3 from the tee on 20 minutes but it wasn’t long before the Scots were on the back foot again.

Hogg was driven back over his own try-line with the ball in hand. Scrum Ireland. Off went CJ Stander from the base and, in quick order, over went Furlong amid a ruck of bodies for Ireland’s third touchdown. It was almost too easy for Schmidt’s team.

As the rain started to fall more steadily in the second-half, Ireland took an even firmer grip on the game. Just before the hour-mark they struck for their bonus point try to all but guarantee top spot in the pool and a probable quarter-final with South Africa, a game that won’t look as daunting to them now as it might have done two days ago.

Conway, filling in for absent talisman Keith Earls, got it. Murray’s box kick was not dealt with by Ryan Wilson in his own 22. Jordan Larmour picked it up and offloaded to Murray, who put Conway away. The wing stepped around the last defender to finish with aplomb.

Murray missed the conversion, not that it mattered. The next time an Irishman had a pot at goal, Jack Carty was on the field and he made no mistake. Ireland then led 27-3 and at the final whistle the 24 point winning margin was no more than deserved.