Cork City secured an uninspiring 0-0 draw at home to Finn Harps which all but secures the Leesiders safety from relegation. Neale Fenn’s charges are seven points clear of Harps with four games to play.

Fenn is still waiting for his first winning as City manager having lost his opening three games in charge.

Conor McCormack was left to rue a missed penalty at Turner’s Cross, which would have sealed the three points for City and all but mathematically meaning safety from relegation for the 2017 Premier Division champions.

The hosts were awarded a 47th-minute spot-kick when Mark O’Sullivan was upended in the box by Josh Smith.

But McCormack went straight down the middle and Mark McGinley dived to save his effort with his legs at the Shed End.

That was the best chance for either side, though City goalkeeper Tadhg Ryan had to be on his toes to tip a goalbound effort over the crossbar in the dying minutes from Russell.

Dundalk can win a fifth top flight league title in six years if they avoid defeat against Shamrock Rovers at Oriel Park on Monday night.

That’s after a somewhat controversial 0-1 win over Waterford at the RSC tonight.

The only goal of the game came from Daniel Kelly, who finished into an empty net for his sixth goal in five matches against Waterford this season. Waterford felt they should have had a free-kick in the buildup to the goal when Pat Hoban’s hand brushed Slevin’s heel.

The truth is that it was never a free-kick however and the home side switched off somewhat following what they felt should have been a free out.

Shamrock Rovers drew 0-0 with St Patrick’s Athletic in Tallaght tonight which means they now travel to Oriel on Monday knowing that only a victory will spoil Dundalk’s title party.

A Lilywhites win will secure the title. And tonight when Rovers did drop points, there was an ex-Dundalk man in the opposition dugout masterminding St Pat’s defensive resistance.

Stephen O’Donnell – who became a father today – was that man, having had such an amazing career with Dundalk. Aside from all but guaranteeing his former club win this year’s title, there wasn’t much to write home about from tonight’s match at Tallaght though Hoops’ keeper Alan Mannus and especially Saints’ goalkeeper Brendan Clarke made some outstanding saves late on and was man-of-the-match.

The story of the night at the Ryan McBride Brandywell Stadium was 14 year-old Evan Ferguson coming off the bench to make his competitive debut for Keith Long’s Bohemians against Derry City in a match which never really captured the imagination otherwise and ended goalless.

Questions have also been asked if it was appropriate for Long to play such a young player in mens’ competitive match.

It could prove a crucial point for Bohs in their quest for a European place next season and their goalkeeper James Talbot was certainly the busier netminder on the night.

Derry came very close to breaking the deadlock in the 21st minute when David Parkhouse was involved in a race for possession with Talbot, who did well to clear the ball.

It was Bohs however who missed the best chance of the match with Luke Wade-Slater played into a one-on-one situation with Peter Cherrie, but the winger hoofed the ball over the bar.

Barry McNamee had the last real chance of the game, but his shot was saved by Talbot with 17 minutes to play as Derry continued to push forward but Bohs held out to share the spoils. 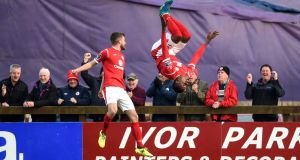 Sligo Rovers meanwhile pretty much condemned UCD to relegation, despite the Bit O’ Red playing more than three quarters of the match with 10 men.

Sligo had Ronan Murray sent off after 19 minutes when the striker went in late on Harry McEvoy and there was no complaints when referee Neil Doyle showed him the red card.

UCD goalkeeper Conor Kearns bundled David Cawley’s corner-kick into his own net after 33 minutes, with the difficult underfoot conditions playing a part.

Sligo went two goals up on the stroke of half-time when Romeo Parkes burst free and checked inside before calmly side-footing past Kearns.

It was a lead Sligo never looked like surrendering. The result leaves UCD six points adrift of the relegation play-off place with four games to play, and having taken one point from their last six matches, it’s a gap they won’t bridge, the Students will be playing First Division football next season.