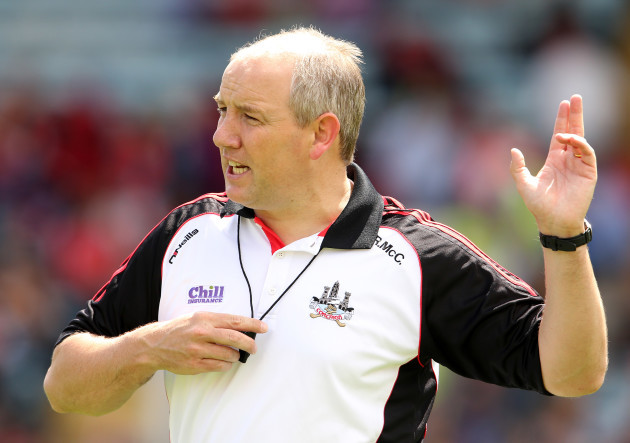 Cork senior football manager Ronan McCarthy has made two changes to the starting 15 from the side that lost the Munster final to Kerry for Saturday’s clash with Laois.

Tom Clancy from Clon replaces Tomás Clancy (Fermoy) in the half-back line while Paul Kerrigan drops to the bench with Kevin O’Driscoll starting in his place.

Kerrigan’s blistering pace will no doubt be a major asset in the second half against the Leinster side with a place in the Super 8s at stake. O’Driscoll offers a huge work-rate and is also a kick-out option.

Nathan Walsh was withdrawn before half-time against the Kingdom with an injury, where Nemo’s Kevin O’Donovan proved an excellent replacement. However the Douglas corner-back is deemed fit enough to merit inclusion for the crunch qualifier in Thurles, 5pm.

Knocknagree’s Eoghan McSweeney who looked very sharp against Limerick but was absent for the Munster final through injury is included among the subs.

Clon now have four starters, the White brothers Mark and Seán, Clancy and newcomer Liam O’Donovan, who had a stormer at wing-back the last day.

Both Cork teams will be in action at Croke Park if they get past this weekend’s qualifiers.

The Cork hurlers travel to Westmeath and if they win they’ll take on Kilkenny in the All-Ireland quarter-final on Sunday week.

The footballers’ first Super 8 game would be Saturday, July 13 at 7pm against Dublin, with Tyrone or Cavan the following weekend on Jones Road, and Roscommon at home on the August Bank Holiday weekend.