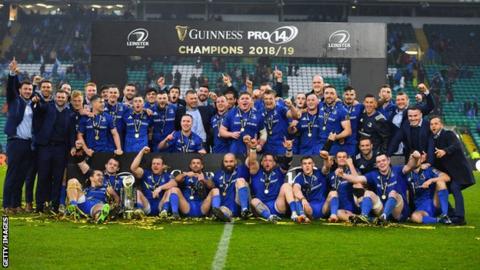 Matt Fagerson’s try gave Warriors the lead but Garry Ringrose pounced to cross after Stuart Hogg’s kick had been charged down.

Hogg went off injured in his final Glasgow appearance before team-mate Grant Stewart got a late try but it was not enough for Dave Rennie’s side.

Adam Hastings missed the conversion on Warriors’ second try and they could not get the try they needed in the final few minutes to snatch the win and their first trophy since 2015’s Pro12 title.

Referee Nigel Owens yellow-carded a player from each side with Kyle Steyn for the hosts and the visitors’ Rob Kearney spending time in the sin bin in the second half.

Rugby people piled into one of the great Scottish footballing citadels in vast numbers, the throngs descending on the east end of Glasgow despite the rain that fell in sheets for much of the evening.

Glasgow might have had home city advantage, but Leinster, with their Lions and their Grand Slammers and their multiple titles, were undoubted favourites. The feeling was that Glasgow had to take their recent coruscating form in the Pro14 and then up it a level to get through the reigning champions, they had to match them physically and punish them remorselessly when the chances arose.

The Celtic Park crowd roared once and then twice when Hastings made it 7-0. Then, an almighty groan. Within two minutes they had coughed up the softest score, Hogg getting charged down by Luke McGrath with the breaking ball bouncing kindly for Ringrose to score.

Against a backdrop of boos for taking too long to get his kick away, Sexton missed the conversion – his second miss of the final. Hastings put over a penalty after more Glasgow pressure that was sparked by Steyn and Hogg. So far, so good for the challengers.

Around that 25-minute mark everything changed in this final. Glasgow suffered the horrendous blow of having Fraser Brown stretchered off, then they conceded a second try, a product of relentless forward waves and culminating with Healy barging over. Sexton’s conversion made it 12-10. Sexton’s penalty soon after, as Leinster’s scrum got on top, made it 15-10 and that was to be the half-time score.

Leinster’s muscles pinned Glasgow on their own five-metre line for an age, scrum following scrum as the minutes ticked by. This had become the final that Leinster had wanted; a points advantage, all the possession, all the territory, Glasgow’s dangerous runners silenced, the 47,128 crowd, a new record, all but silenced.

The very breath was being drained from the night. When that siege was eventually lifted and Glasgow got out of their own 22 there was a moment of high controversy. Hogg went up to field a high ball and Kearney went clattering into him in the air. Hogg fell to earth and, briefly, he looked like he had been knocked out.

The crowd roared for a red card. Referee Owens deliberated, watched the incident again, and gave a yellow. A cop-out. That was Hogg’s night and Glasgow career done. He stood up and wobbled. He could not reappear after that.

Glasgow exacted a revenge of sorts when with five minutes left they engineered space up the right wing for the improbable finisher, Stewart, to run in from the 22m line. It was a brilliant score that made it 18-15. Hastings could not reduce the gap with the conversion and Glasgow could not find another gap in the Leinster defence or the field position to boot over a kick to take it to extra-time. The serial winners had done it again.