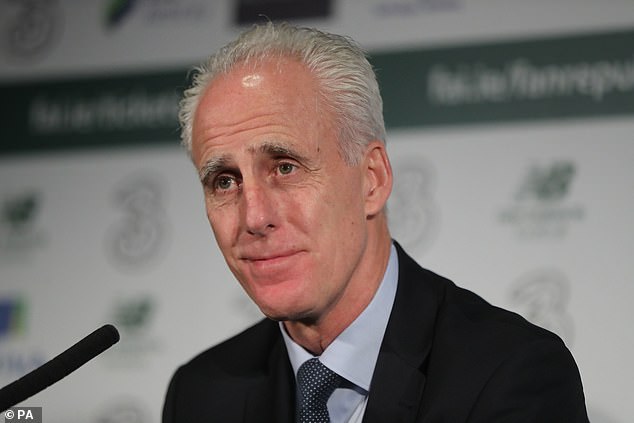 Republic of Ireland manager Mick McCarthy has addressed the media at his pre-match press conference ahead of tomorrow night’s match with Georgia at the Aviva Stadium.

McCarthy was asked to address rumors about a potential planned protest by Ireland fans at the Aviva Stadium tomorrow night and controversy surrounding John Delaney stepping down as chief executive of the FAI but then immediately taking up a newly created role as Executive Vice-President of the organisation.

When initially spoken to regarding Delaney’s newly created role as Executive Vice-President of the FAI, McCarthy said: “He (Delaney) must have a great big, wide door to fit in all those words of his job title,” – which prompted a chorus of chuckles from the assembled press corps.”

It is thought that Ireland fans are planning to protest by throwing tennis balls onto the pitch at the Aviva Stadium tomorrow night so as to disrupt the game. Mick McCarthy has said that he hopes that that will not be the case.

Speaking at Abbotstown today, the 60 year-old said: “If that’s the case (tennis balls being thrown onto the pitch), I’ve been at games, I’ve been at Charlton when people have done it, it’s not going to help us play any better, that’s for sure, so I hope that that’s not the case.

“I think they’re overlooking that they’re coming to watch a football match and they want us to win. And to give us the best chance of winning is by getting behind us and not having any outside influences affecting that.

“But, I can’t do anything about it if they do. I’m not going to take a tennis racket with me!

“Our fans – and I’m not just saying it now because I’m back in the job – they’re the best fans. They’re fabulous and I just want them to get behind the team and if they have to demonstrate, do it somewhere else and at another time because we don’t want it to affect the performance.”

McCarthy and the Irish squad are back in Dublin after what proved to be a more difficult than expected opening Euro 2020 qualifying encounter away to Gibraltar on Saturday.

Ireland narrowly beat the nation ranked 177th in the world, a nation comprised mainly of part-timers and Ireland goalkeeper Darren Randolph was forced into a stunning save early in the second half, with Jeff Hendrick scoring the only goal of the game a few minutes later.

Georgia have proven to be a stubborn opponent for Ireland. The two nations have been drawn in the same group now for a third successive qualifying campaign. Of the four encounters in the previous two campaigns, the Boys in Green have won three of the fixtures by one goal with the other fixture – the most recent fixture between the nations (in September 2017) – finishing in a 1-1 draw.

Any sort of a win for Ireland tomorrow night will be a good result, after which we look towards the more difficult test of Denmark in Copenhagen coming up in June. Also in the Republic of Ireland’s group tomorrow night, the two top seeds in the group face off as Switzerland host Denmark at St. Jakob-Park in Basel. A draw in that match is to be hoped for from an Irish perspective.