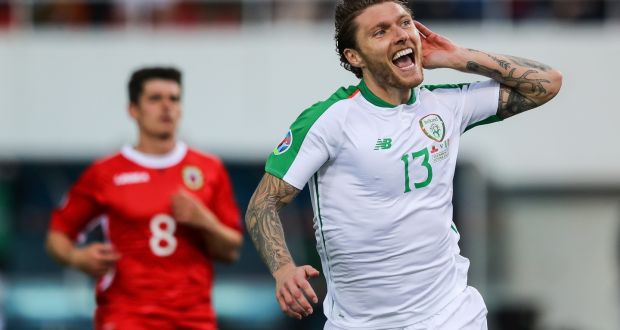 Mick McCarthy started his second tenure in charge of the Republic of Ireland with an underwhelming 1-0 Euro 2020 qualifying win over Gibraltar at the 2,300 capacity Victoria Stadium today.

The 60-year-old has been with the players since Monday morning and the Irish team struggled throughout, creating few chances. The closest the Irish came to scoring in the first-half was 10 minutes before the half-time whistle when a close range deflected defensive header of home captain Chipolina forced a fantastic fingertip save from home goalkeeper Goldwin.

The conditions were very difficult for both teams, with a gale force wind and the plastic pitch certainly not helping the Irish cause. Seeing the occasional aeroplane take off behind the pitch was also an unusual sight! Considering the short period of time McCarthy has had with the players, to win 1-0 isn’t as bad as it could have been. This is even more so the case when considering the fact that the visitors very nearly went a goal down two minutes into the second-half when a close range bullet header from Chipolina forced an incredible, full length, one-handed save from Ireland goalkeeper Darren Randolph.

Gibraltar – ranked 194th in the world – more than held their own in the first half but were ultimately undone four minutes after the restart when Jeff Hendrick stroked home for his second international goal.

The visitors rarely looked like adding to that strike as their Group D campaign got off to a winning start, albeit an unimpressive one.

The close escape for Ireland early in the second-half seemed to spark the visitors into life briefly and they forged ahead in the 49th minute. Running onto an excellent ball from Cork native and man-of-the-match Conor Hourihane, McGoldrick sped away from Jack Sergeant down the left flank and picked out Hendrick, who coolly slotted into Goldwin’s bottom-left corner from 15 yards.

In the latter stages of the match, there were a few hairy moments for both defences but a one goal win was probably a fair result for the visitors.

Next up, Ireland host Georgia at the Aviva Stadium on Tuesday at 7:45pm. The Georgians lost 0-2 against Switzerland in Tblisi earlier today with Denmark the only side in the group yet to have played a match.