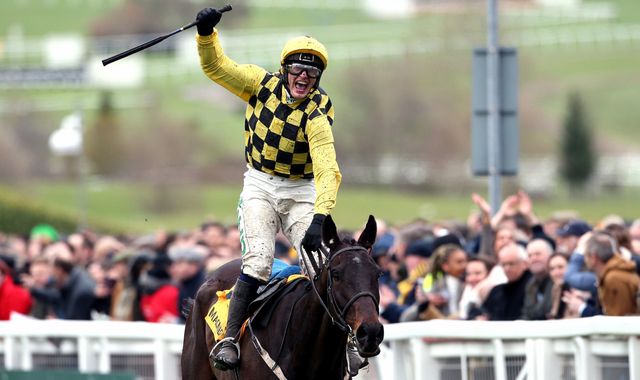 Over the duration of the four day festival it means that Ireland v England has finished in a 14-14 draw in terms of wins.

Mullins, the Festival’s most successful trainer, had previously finished second six times in the most prestigious race of the festival.

Al Boum Photo had some anxious moments with his jumping but raced away to win by two-and-a-half lengths in the end.

“I got in a beautiful rhythm. When you’re going well, it just seems so simple.”

But there was mixed emotions for Mullins after one of his three other runners, Invitation Only, suffered a fatal injury following a fall during the race.

It was the second horse lost by Mullins at the Festival after Ballyward on day one and came after the Joseph O’Brien-trained Sir Erec broke down during the day’s opening race.

For a long time it looked like last year’s winner Native River and runner-up Might Bite would be in the shake-up again as they headed the field after the first circuit.

But it was Al Boum Photo, the only one of the four Mullins runners to make it to the second circuit, who started to look the strongest.

The pair had a slight wobble at the second last before safely negotiating the final fence and battling up the famous Cheltenham hill for the victory.

Native River was fourth, with the 100-30 favourite Presenting Percy in eighth.

“I’ve got used to the disappointment of finishing second and I sort of resigned myself to never winning a Gold Cup,” said Mullins, whose late father Paddy trained Dawn Run to victory in the 1986 race.

“To have three of my four runners out of the race before they came to the second last first time round – I was depending on one.

“Every time I looked at Paul, his body language told me he was very happy and the horse was relaxed.

“When he came over the last, I just looked at the winning post and thought nothing would come and get him unless he stops or runs out or something like that.

Townend and Al Boum Photo had been at the centre of a dramatic incident at last year’s Punchestown Festival that left the jockey with a 21-day ban for dangerous riding.

Townend, while leading the Champion Novices’ Chase, steered the horse right of the final obstacle having apparently heard a shout telling him to bypass it.

In the process he collided with fellow runner Finian’s Oscar and crashed into the white fence.