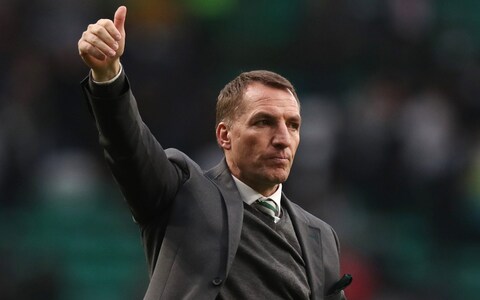 Only the greenest of Celtic fans could have persuaded themselves that Brendan Rodgers was going to be around long enough for the 10-in-a-row they have sung about for the longest time.

Only the most hopeful of Hoops could have envisaged an ambitious manager being prepared to bounce his head off a glass ceiling in Glasgow’s east end for another two and a half years.

No question, Rodgers gave the supporters reason to believe that he wouldn’t leave in the short-term, but that’s a game managers play – and have to play. Badge kissing is not the exclusive preserve of footballers.

Among Celtic folk, there will be frustration and some fury that he’s probably going to Leicester City now, mid-season when a Treble-Treble is up for grabs. Even those who accepted that he was going to depart soon would have at least expected him to stay until the summer.

Disappointing for sure. But not wholly unexpected. Sentiment nearly always gets trumped by ambition in football.

If the east end of Glasgow is reverberating to the sound of groaning, there is an altogether different tune being sung around the rest of the country. Rodgers’ apparently imminent departure would mean that Celtic’s dominance in Scotland has been compromised.

Rangers are currently eight points behind them in the Scottish Premiership. Eight points is still a lot, but given the turbulence that Celtic may now experience at the loss of the man who created the Scottish Invincibles, it may not be the insurmountable total that it looked a few days ago, so long as Steven Gerrard’s team reel off win after win. That’s a big ‘if’ but this news will buoy Rangers no end. And Aberdeen in their slipstream. And Hibs who play Celtic in the Scottish Cup at the weekend.

In the three seasons before he arrived in Scotland, the cup trophies were dished out far and wide. Hibs, Ross County, Inverness Caledonian Thistle, St Johnstone and Aberdeen all won silverware. Rodgers brought an end to that. Aberdeen have been beaten in three finals by the Northern Irishman’s team. Suddenly, in a post-Rodgers landscape, there is hope again for the rest.