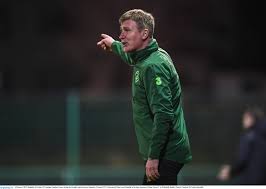 Back to work. Stephen Kenny left his post at Dundalk with the promise of more glamorous tasks than this Wednesday evening at Whitehall.

But this is where the foundations are laid. After a short training camp, his home-based U-21 selection were pressed into action against the Irish amateurs.

There was only a couple of hundred spectators, a combination of recognisable faces from the football community and some curious supporters who got free admission for his team’s 1-0 win.

Ostensibly, this is about identifying the best local talent that will push for inclusion in his first full squad in March. He would have been familiar with them all from Dundalk, but this was a chance to work with them rather than against them.

And Kenny’s eventual ascension to the top job has built the interest levels around everything he does.

That extends from his player preferences to formations and patterns of play. He has stressed a commitment to the same expansive style that he favoured during his time with Dundalk.

His cubs were just that bit better than the amateur opposition that was a mix of youth and experience.

Kenny went with players with a reputation for being comfortable on the ball and that showed when it came to the technical side of this encounter. They were tidier.

Every shout from the bench was audible. From the encouragement offered to Trevor Clarke, an occasional thorn in his side in Shamrock Rovers, to the frustration when the boys in green failed to make their case when Clarke appeared to be fouled.

“They didn’t even appeal,” sighed Kenny, turning to address his assistants Keith Andrews and Jim Crawford.

It’s all part of the adjustment, a contrast from his old gig when he was working daily with a streetwise Dundalk team that knew how to manage games.

A fair portion of the sideline calls were aimed towards centre-halves Conor McCarthy and Liam Scales, urging them to get talking and organise the players ahead of them.

There were bright spots for Kenny. At this unveiling, he listed off a raft of locals. UCD winger Neil Farrugia was given prominent mention and the tall left winger impressed here, creating the decisive first-half goal for busy Shamrock Rovers attacking midfielder Brandon Kavanagh.

He played next to Aaron Bolger, the Rovers product who has just joined Cardiff City on loan with a view to a permanent deal in the summer. Ireland’s striker was Aaron Drinan, a former Cork and Waterford player who was given permission by Ipswich to come home this week as the exception to the description of this team.

Drinan was eventually replaced by Michael O’Connor, a Dundalk lad who is now with Linfield after bouncing around the clubs since falling foul of Kenny at Oriel Park. O’Connor had spoken of wanting to declare for Northern Ireland, yet Kenny mended bridges by asking the bustling striker to join up.

It reflected the mixed profile of this group,with Kenny asserting that he will not just select home-based players for the sake of it. The scrappy fare in the soggy dying stages, as the amateurs pressed for leveller, will be a world away from what lies ahead in qualifiers with Italy and Sweden later this year.

For Kenny – and one suspects quite a few of this group – this is where the journey begins.