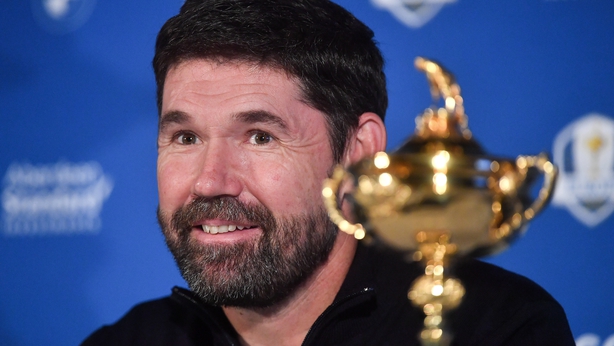 Three-time major winner Padraig Harrington has been confirmed as Europe’s captain for the 2020 Ryder Cup.

The Dubliner had been the clear favourite to succeed Thomas Bjorn at Whistling Straits and the news was confirmed at a press conference at the European Tour’s Wentworth headquarters.

Harrington has served as a vice-captain at the last three Ryder Cups and appeared in the biennial contest against the United States six times as a player, beginning at Brookline in 1999. He was on the winning team in 2002, 2004, 2006 and 2010.

He said: “I’m thrilled. It’s not something I went into lightly. You could look at this as being a natural progression, a move on from player to vice-captain to captain but it’s not something that I take on without a certain amount of trepidation.

“I really want to be a help. I want to hopefully leave the European Tour and Ryder Cup in a better place after two years, but I know we are going to a new venue, it’s an away match, we’re going to have on average three more rookies coming into the team.

“I have to be part of that team and ensure that I find an edge to make the team perform to the best of their abilities and hopefully get a win.”

“I felt it was the right time for me to go for it.

“I am excited by the whole idea. We’ve had some great captains over the years and I’ve learned from all of them.

“It is daunting because you want to do a good job. Hopefully I will pull it together and say the right things at the right times.”

Despite winning two Open titles and the US PGA Championship, Harrington feels he is putting his career “on the line” by accepting the captaincy.

“It’s something I did think long and hard about,” he added.

“It’s possibly easier to be Ryder Cup captain at home, but I realise it was good timing in my career and probably the best chance for the team in an international setting, going to the US having me as captain at this time.

“Then it really came down to whether I wanted to be in the hat and put what is a successful career on the line.

“It’s a different element to your career and we know a successful captain is great and a losing captain – it’s his fault. I’m putting something on the line going out there.”

The 47-year-old Irishman also has good experience of the course in Wisconsin having played there in the US PGA Championships of 2004, 2010 and 2015.

Bjorn and past captains Darren Clarke and Paul McGinley are on the panel that selects the next captain along with European Tour chief executive Keith Pelley and a member of the Tour’s Players Committee.

Harrington became the favourite after Lee Westwood, the other main candidate, indicated a preference to do the job in Rome in 2022.

Europe have dominated the Ryder Cup in the modern era, winning nine of the last 12 matches.

“I think it will mean a lot, it’s a great honour for him,” two-time Ryder Cup player Des Smyth told RTÉ Sport.

“He’s the right man at the right time in his career.

“The fact that he is still a player means a lot to the players around him because he knows these guys really well.

“He has done three vice-captaincies and I think he’s ready for this job.

“He has gravitas, when he is in the room people notice Padraig.”