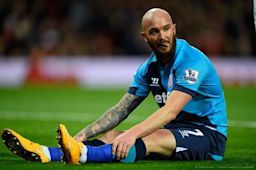 Stephen Ireland is on the market again after Bolton Wanderers announced the departure of the former Irish international midfielder this afternoon.

The Championship outfit, who have recently been experiencing financial difficulties, confirmed that Ireland’s contract has been cancelled by mutual consent, with the club wishing the player the best for the future.

Having been a free agent since his release from Stoke City at the end of last season, the 32-year-old Corkman signed for Bolton in October.

A short-term deal which was due to expire in January has now come to a premature end. Ireland, who was working his way back to full fitness, made no first-team appearances during his time at Bolton, who are second from bottom in the Championship.